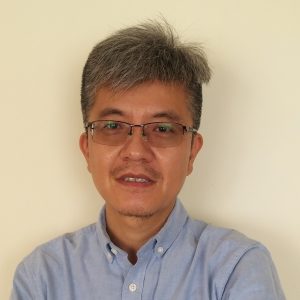 Associate Head of Department of English

Brian Chan joined the University of Macau in 2004 and holds an associate professorship.

He obtained his MA in English Studies at the Chinese University of Hong Kong and his PhD in Linguistics at University College London.

Brian would be interested in supervising MA dissertations in the area of bilingualism or code-switching.

At the University of Macau, Brian mainly teaches courses of Bilingualism for BA and MA students, which he first developed as a visiting lecturer of CUHK before coming to Macau. These courses cover various aspects of bilingualism, from sociolinguistic description of bilingual communities to psycholinguistic models of the bilingual brain, from bilingual discourse in various registers/genres to the syntax of code-switching, and from second language acquisition to bilingual language acquisition, drawing on research and data in the Chinese/ Cantonese-English context.

His thesis is entitled ‘Aspects of the Syntax, Production and Pragmatics of Code-switching-with special reference to Cantonese and English’, a revised version of which was published subsequently (Chan 2003). Having been trained in theoretical linguistics as a student, Brian was also exposed to applied linguistics, partly due to his research topic, namely, code-switching, which has been analyzed primarily in the perspectives of sociolinguistics and discourse analysis, and partly due to his work as a lecturer in the English Departments of the City University of Hong Kong and the Hong Kong Polytechnic University.