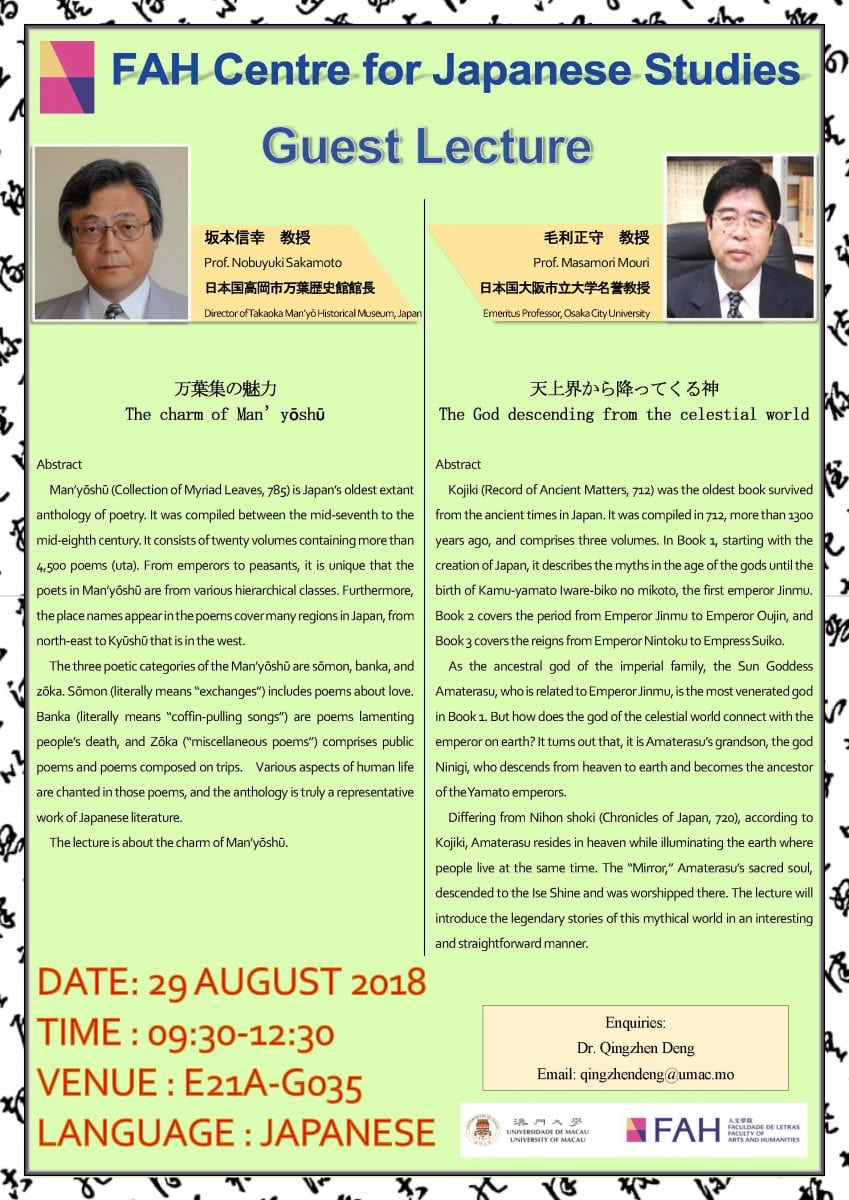 Man’yōshū (Collection of Myriad Leaves, 785) is Japan’s oldest extant anthology of poetry. It was compiled between the mid-seventh to the mid-eighth century. It consists of twenty volumes containing more than 4,500 poems (uta). From emperors to peasants, it is unique that the poets in Man’yōshū are from various hierarchical classes. Furthermore, the place names appear in the poems cover many regions in Japan, from north-east to Kyūshū that is in the west.

The three poetic categories of the Man’yōshū are sōmon, banka, and zōka. Sōmon (literally means “exchanges”) includes poems about love. Banka (literally means “coffin-pulling songs”) are poems lamenting people’s death, and Zōka (“miscellaneous poems”) comprises public poems and poems composed on trips.  Various aspects of human life are chanted in those poems, and the anthology is truly a representative work of Japanese literature.

The lecture is about the charm of Man’yōshū.

天上界から降ってくる神 The God descending from the celestial world

Kojiki (Record of Ancient Matters, 712) was the oldest book survived from the ancient times in Japan. It was compiled in 712, more than 1300 years ago, and comprises three volumes. In Book 1, starting with the creation of Japan, it describes the myths in the age of the gods until the birth of Kamu-yamato Iware-biko no mikoto, the first emperor Jinmu. Book 2 covers the period from Emperor Jinmu to Emperor Oujin, and Book 3 covers the reigns from Emperor Nintoku to Empress Suiko.

As the ancestral god of the imperial family, the Sun Goddess Amaterasu, who is related to Emperor Jinmu, is the most venerated god in Book 1. But how does the god of the celestial world connect with the emperor on earth? It turns out that, it is Amaterasu’s grandson, the god Ninigi, who descends from heaven to earth and becomes the ancestor of the Yamato emperors.

Differing from Nihon shoki (Chronicles of Japan, 720), according to Kojiki, Amaterasu resides in heaven while illuminating the earth where people live at the same time. The “Mirror,” Amaterasu’s sacred soul, descended to the Ise Shine and was worshipped there. The lecture will introduce the legendary stories of this mythical world in an interesting and straightforward manner.