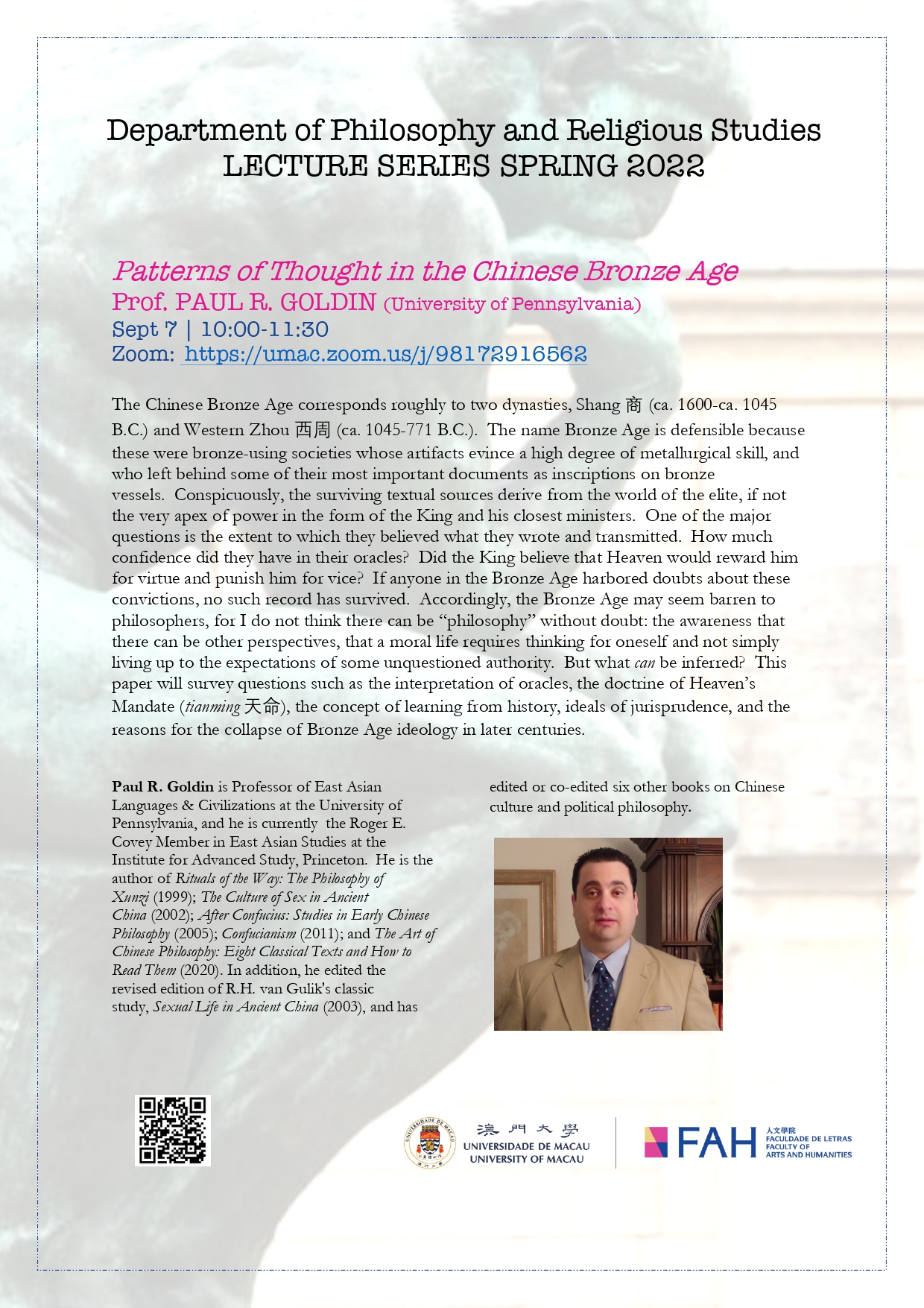 The Chinese Bronze Age corresponds roughly to two dynasties, Shang 商 (ca. 1600-ca. 1045 B.C.) and Western Zhou 西周 (ca. 1045-771 B.C.).  The name Bronze Age is defensible because these were bronze-using societies whose artifacts evince a high degree of metallurgical skill, and who left behind some of their most important documents as inscriptions on bronze vessels.  Conspicuously, the surviving textual sources derive from the world of the elite, if not the very apex of power in the form of the King and his closest ministers.  One of the major questions is the extent to which they believed what they wrote and transmitted.  How much confidence did they have in their oracles?  Did the King believe that Heaven would reward him for virtue and punish him for vice?  If anyone in the Bronze Age harbored doubts about these convictions, no such record has survived.  Accordingly, the Bronze Age may seem barren to philosophers, for I do not think there can be “philosophy” without doubt: the awareness that there can be other perspectives, that a moral life requires thinking for oneself and not simply living up to the expectations of some unquestioned authority.  But what can be inferred?  This paper will survey questions such as the interpretation of oracles, the doctrine of Heaven’s Mandate (tianming 天命), the concept of learning from history, ideals of jurisprudence, and the reasons for the collapse of Bronze Age ideology in later centuries.

Paul R. Goldin is Professor of East Asian Languages & Civilizations at the University of Pennsylvania, and he is currently  the Roger E. Covey Member in East Asian Studies at the Institute for Advanced Study, Princeton.

He is the author of Rituals of the Way: The Philosophy of Xunzi (1999); The Culture of Sex in Ancient China (2002); After Confucius: Studies in Early Chinese Philosophy (2005); Confucianism (2011); and The Art of Chinese Philosophy: Eight Classical Texts and How to Read Them (2020). In addition, he edited the revised edition of R.H. van Gulik’s classic study, Sexual Life in Ancient China (2003), and has edited or co-edited six other books on Chinese culture and political philosophy.