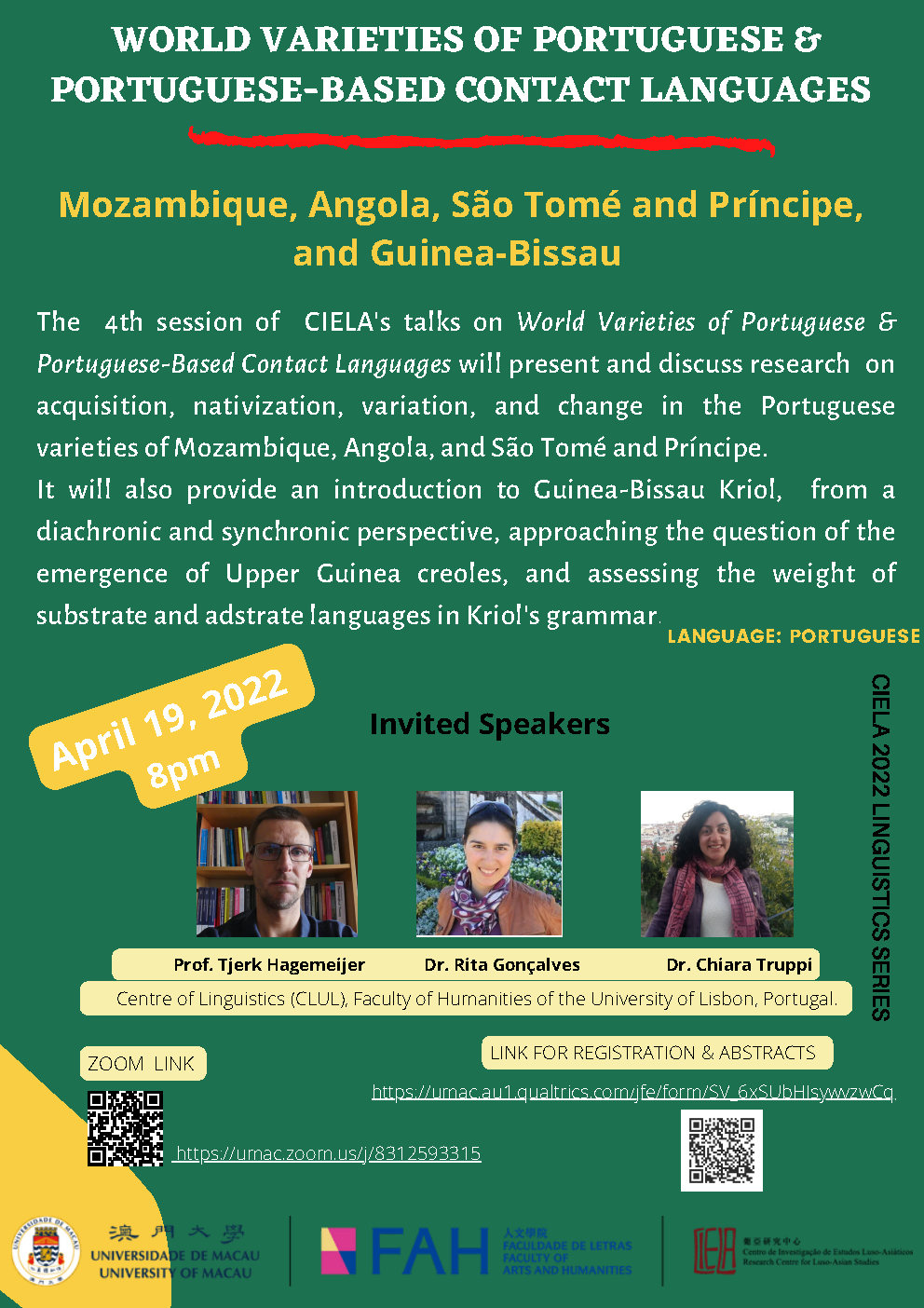 This open online session will consist of three guest lectures, and is the 4th  of the CIELA open guest talk series World Varieties of Portuguese  and Portuguese-based Contact Languages, successfully initiated in December 2021. This series aims to contribute to the diffusion of current research in the field, from non-vernacular varieties to creole languages, to emerging national varieties and L2 learner varieties. Each session will focus on specific regional or national linguistic contexts. In this session the focus will be on Portuguese varieties Mozambique, Angola, São Tomé and Príncipe, and Guinea-Bissau Kriol.

Professor Tjerk Hagemeijer will briefly summarise the current linguistic situation of Portuguese in Angola, Mozambique and São Tomé and Príncipe, emphasising, in particular, the historical process of acquisition and nativization of this language in contexts of contact with typologically distinct languages ​​from the Bantu and Creole groups. The second and main objective of his talk consists in the presentation of a case study on the expression of the argument with the Target theme of verbs of movement in the urban varieties of these three countries.

Dr. Rita Gonçalves will focus on the syntax of Portuguese spoken in Maputo/Mozambique, Luanda/Angola and São Tomé/São Tomé and Príncipe varieties in process of nativization and historically in contact with Bantu and Portuguese lexified Creole languages, respectively, Changana, Kimbundu and Forro. She will present a case study on the expression of the direct object and the indirect object and will discuss linguistic factors such as animacy and pronominalization, as well as the inter and intraspeaker variation.

Dr. Chiara Truppi will provide a brief introduction to the Portuguese creole spoken in Guinea-Bissau (Kriol or Guinean) with regard to its general synchronic and diachronic features. Kriol belongs to the group of Upper Guinea creoles which, together with Cape Verdean and Casamanse, constitutes the phylogenetic group of Portuguese creoles of Upper Guinea. It has been proposed that Papiamentu, a (mainly) Spanish-based Caribbean creole, is also grouped with the Upper Guinean creoles, with which it may share its origins (Quint 2000, among others). In view of this,  her talk will  also focus on the question of  Kriol’s substrate and adstrate languages, assessing the weight of these languages in its grammar.