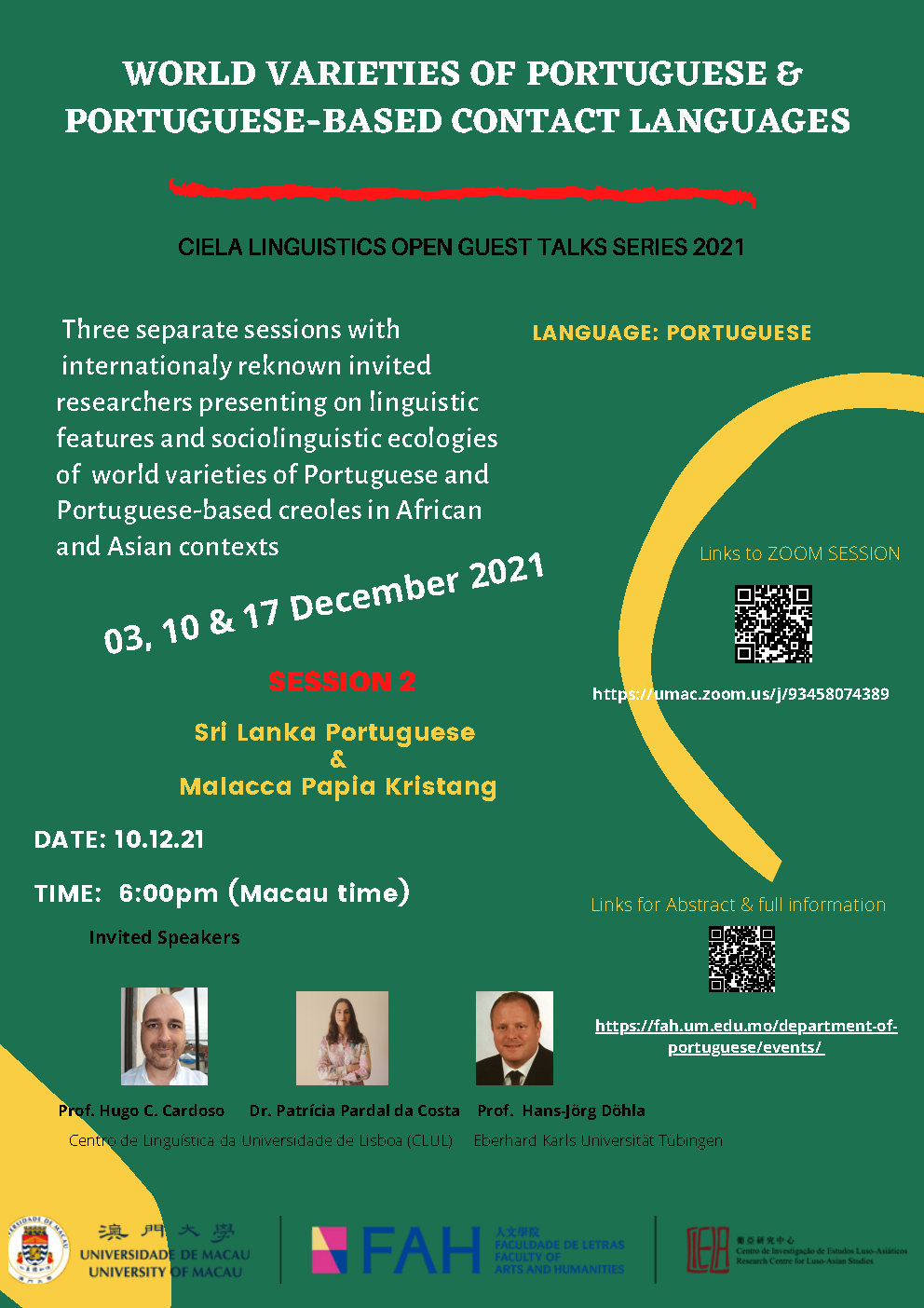 The CIELA open guest talk series World Varieties of Portuguese  and Portuguese-based Contact Languages aims to contribute to the diffusion of current research in the field, from creole languages to non-vernacular varieties, emerging national varieties and L2 learner varieties.

Each session will focus on specific regional or national varieties of Portuguese or Portuguese-based contact languages.  Foir  the current edition spaced out through 3 weeks in December 2021, the series will cover the following:

Variation as an object of study in creole languages: the case of Sri Lankan Portuguese CreolePatrícia Costa Universidade de Lisboa

Although variability constitutes an inherent and universal property of the world’s languages, the synchronous description of a language does not always include the documentation and inclusion of instances of variation, since this can be perceived as a marginal phenomenon, attributable to forces random or resulting from performance errors. In other cases, due to obsolescence and the small size of communities, it is the access to a restricted demographic sample and its more or less homogeneous linguistic behavior that leads to the categorical description of certain phenomena. In addition to these more general limitations, there is also the difficulty of identifying and interpreting instances of variation in under-documented and/or under-described languages, which neither benefit from previous linguistic and ethnographic research nor from the standardization that other languages ​​have.

Taking Sri Lankan Portuguese Creole as a case study and the analysis of spontaneous data contained in its documentation corpus (Cardoso 207), this presentation will discuss the methodological challenges and potentialities associated with the study of sociolinguistic variation in Creole languages , often situated at the intersection between contact, linguistic obsolescence and necessarily idiosyncratic social dynamics.

The path of Sri Lankan Portuguese: rise and decline

Among the set of Luso-Asian Creoles (existing or extinct), Sri Lanka (former Ceylon) is notable for having, at a certain point in its history, such a substantial implantation among the population of the territory that several agents ( colonial and religious) felt the need to promote a process of description and standardization of the language. Its current situation, however, is quite different, having observed a geographical and social contraction which, despite not having neutralized the use of the language, now places it under serious threat. In this communication, we map, as the documents reveal, the path of formation, expansion and contraction of the so-called Sri Lankan Portuguese. We will also present a set of initiatives that, in recent times, have promoted not only the documentation and description of this language, but also its preservation.

Aspectual markers in papiá kristang. Uses and functions based on an empirical study

Unlike other Portuguese lexical-based creole languages, papiá kristang (Malaca, Malaysia) has three grammatical markers TAM (tense-aspect-mode) that encode only the aspect and mood and, moreover, do not combine a with the other (see Baxter 1988, Pinharanda Nunes/Baxter 2004). The ta (1) and ja (2) markers encode the imperfective and the perfective and lo (3) mark the unreal future:

‘Father is going to Singapore’

It is not surprising that papiá kristang does not have formal time markers because Malay Bazaar and Hokkien Chinese as the first substrate and astratum languages ​​of papiá kristang also lack these morphological time markers. Nevertheless, the temporal integration of events in Papiá Kristang is evidently possible.Based on empirical data (36,000 tokens) –collected in fieldwork on the basilectal variety of papiá kristang (Döhla 2021)– our study analyzes the linguistic resources for encoding the grammatical and functional-semantic categories of time and temporality. These semi-spontaneous data come from sixteen announcers who narrated a story through forty images. In our corpus we count 1,086 occurrences of ta, 1,537 occurrences of ja and 68 occurrences of lo.In the framework of this study, we will analyze the distribution and function of formal aspect markers with verbs that express dynamic and static (Aktionsart), the interaction between aspect and time, and the speaker’s perspective (viewpoint aspect).Our investigation presents empirical data on how a purely aspectual formal system works regarding the expression of the temporal deixis. We show how complex coding works through non-complex formal means.

Döhla, Hans-Jörg. 2021. When a companion becomes a patient: Differential object marking in Ibero-Asian Creoles and beyond. unpublished habilitation thesis, University of Tübingen, Germany.

All session are open and can be accessed through the ZOOM links provided.

Language of the current edition: Portuguese