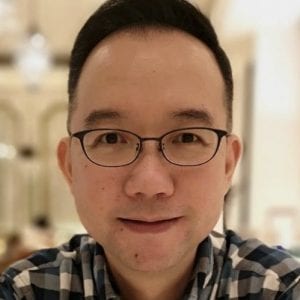 A native of Macau, Joaquim Kuong joined the University of Macau in 2007 and holds an assistant professorship. Before joining the Department of English at UM, he taught briefly at George Mason University (USA). Joaquim had also worked as a translation editor.

He completed his BA in English at UM and obtained his PhD in Linguistics at Georgetown University, Washington, D.C., USA.

Joaquim’s main research interests are in formal and generative approaches to grammar, particularly in the areas of syntax, morphology, and (second/foreign) language acquisition. One of his recent research projects focused on the cross-linguistic variation of the syntactic and pragmatic properties of topic-comment structures, with a detailed study of this linguistic phenomenon in English, Mandarin Chinese, and Portuguese. He is currently investigating the syntax of interrogative phrases and affixation in such phrases, as well as Chinese speakers’ second-language acquisition of the morpho-syntactic features of English interrogatives and the so-called subject-auxiliary inversion (SAI) phenomenon and lack thereof. In addition, he is working on a joint project involving a linguistic analysis of several European philologists’ interpretation of (Mandarin) Chinese grammar in the eighteenth century.

Joaquim would be interested in supervising MAs in the areas of (a) comparative analysis of morpho-syntactic phenomena in English and Mandarin/Cantonese; (b) second-language acquisition of English morphology and syntax; and (c) formal syntactic theory.