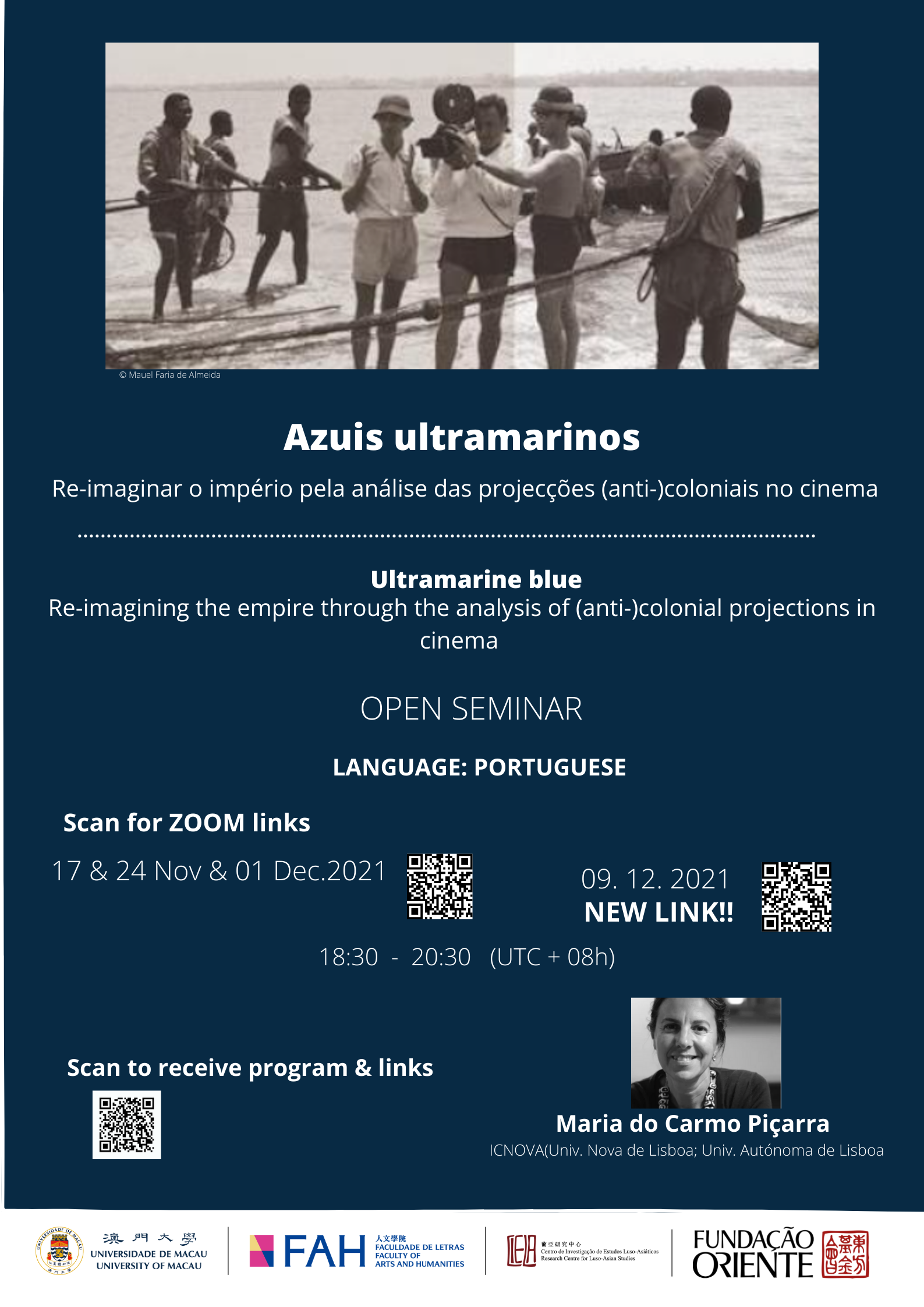 FAH-DPORT-CIELA: Ultramarine blue. Re-imagining the empire through the analysis of (anti-)colonial projections in cinema

The Research Centre for Luso-Asian Studies (CIELA) is pleased to invite all those interested to the Webinar “Ultramarine blue. Re-imagining the empire through the analysis of (anti-)colonial projections in cinema”, by Prof. Maria do Carmo Piçarra, being held on November 17 &  24, and December 01 & 09, 2021, at 6:30pm, via Zoom at “Casa Garden”, Orient Foundation.

The ‘Estado Novo’ used cinema to impose, internally and externally, the image of a pluricontinental and multiracial country. Many ideas propagated were never questioned after the reestablishment of democracy and after the independence of Portuguese-speaking countries.

This seminar, structured into four two-hour sessions, will reveal evidence of the (im)possibility of an alternative look to that of propaganda about the Portuguese ex-colonies in ‘Cinema Novo’s’ works that were censored and banned. It will address the uses of cinema during the liberation struggles and will highlight the cases of Goa, Macau and Timor. It will also consider the emergence of national cinema projects in Mozambique, Angola and Guinea-Bissau, highlighting the contributions of some authors. It will give a brief overview of current cinematographies in African countries with Portuguese as the official language, also particularizing the oriental cases.

Maria do Carmo Piçarra is a researcher at ICNOVA-FCSH and a Professor at the Universidade Autónoma de Lisboa. She holds a PHD, Masters and BA degrees in Communication Sciences. In her post-doctoral research project, ‘Cinema Império’, she has worked on Portuguese cinema during the colonial and post-colonial eras in Portugal, France and England, regarding representations of the empire in cinema (2013-2018). In this context, she was  a guest researcher at the CFAC-University of Reading. She is a film programmer and was assistant to the presidency of the Institute of Cinema, Audiovisual and Multimedia (1998-1999).

She has published, among other books and articles, Azuis ultramarinos. Propaganda colonial e censura no cinema do Estado Novo (Azuis ultramarinos. Colonial advertising and censorship in the cinema of the Estado Novo) (2015), and coordinated, with Jorge António, the trilogy Angola, o nascimento de uma nação (Angola, the birth of a nation) (2013, 2014, 2015) and, with Teresa Castro, (Re)Imagining African Independence. Film, Visual Arts and the Fall of the Portuguese Empire (2017). She has just published the chapter “Resistance and political awareness through the poetic gaze of Sarah Maldoror” in the book Contemporary lusophone African film (Paulo de Medeiros and Livia Apa, 2020). She manages Aleph – Rede de Acção e Investigação Crítica da Imagem Colonial (Aleph – Colonial Image Critical Action and Research Network).