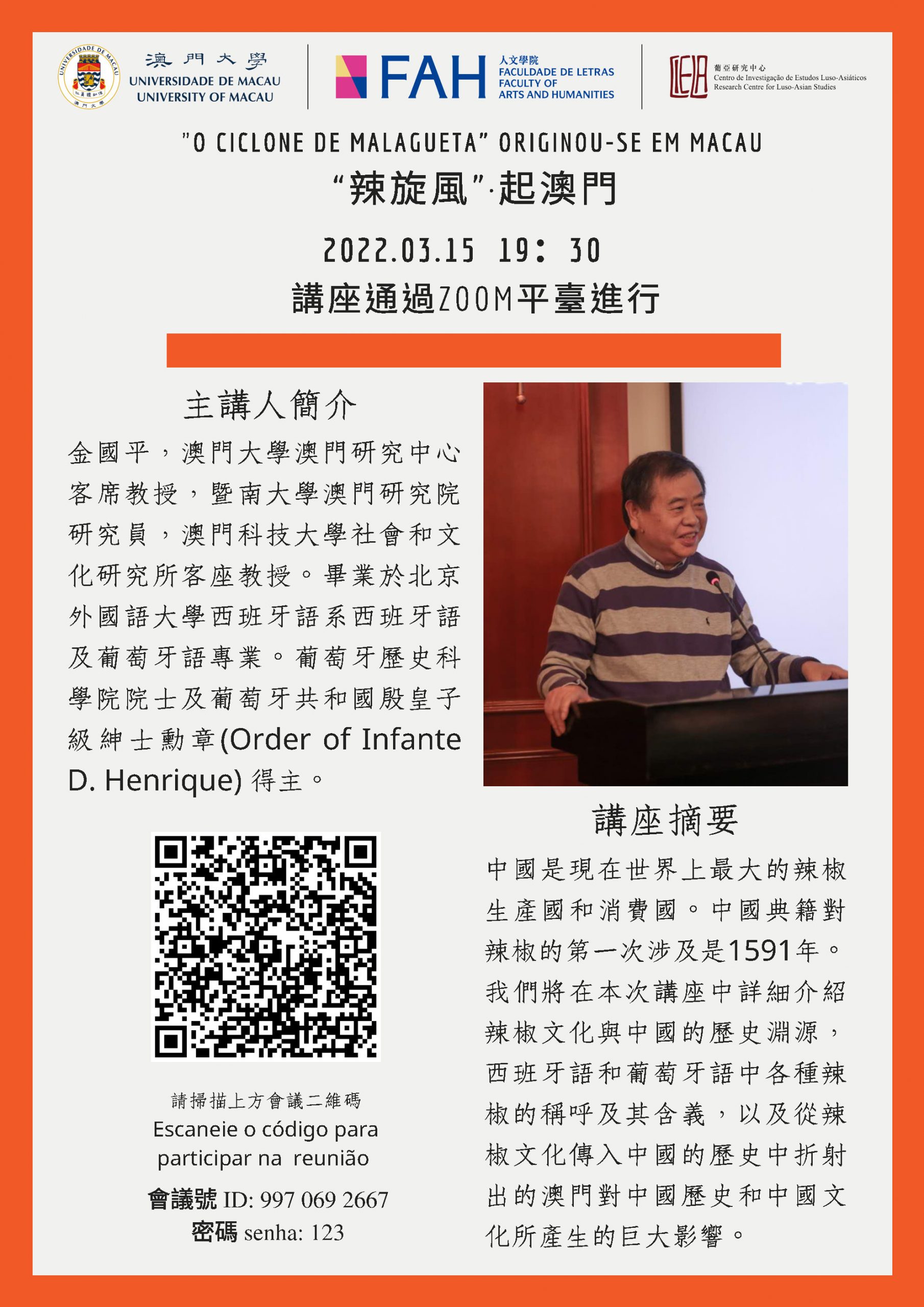 The Department of Portuguese of FAH is pleased to invite all those interested to the online Seminar “Macao as the origin of Chinese Chilli Pepper’s Culture” by Prof. Jin Guoping, being held on March 15, 2022, at 7:30pm, via Zoom: https://umac.zoom.us/j/9970692667?pwd=ZDNaak1RZG4wT09GQ0NmYjFCVTkxUT09

Chili peppers are native to Central and South America. It was Columbus who brought Chili peppers back to Europe, starting the “Columbian Exchange”. It was then spread by the Portuguese to Africa and Asia. Even in Europe, it was the Portuguese who are credited with its spread. The route of the Chili peppers to Asia was from Pernambuco in Brazil to Cochim and Goa in India. It may then have been introduced to Tibet from India by land. From the sea it spread to Malacca, Thailand and Burma. Then possibly from Burma to Yunnan via the ancient Burma-Yunnan route, and then to Guizhou. Another possible route was to Zhejiang province by the Portuguese who began to operate in Shuangyu (Liampó) in 1524. It then followed the Beijing-Hangzhou Grand Canal into the Yangtze River and spread westwards. Another route was the spread to northern China via the Beijing-Hangzhou Grand Canal. It was also spread from Shuangyu to Japan, where it was then imported into Korea.

Historical sources show that es in south-west China were imported from Macau. This is reflected in the names “Hai Jiao(maritime Chili)” and “Guang Jiao(Canton’s Chili)”. The name “maritime Chili” refers to the nature of the species imported from abroad, while the name “Canton’s Chili” clearly indicates that it was imported from Canton. Given that Macao was the only port of commerce in China prior to the Opium Wars, it must have been through Macao, in Canton, that the “Canton’s Chili” was introduced to south-western China. Chili peppers brought a new taste sensation to the Chinese diet. It led to a “Chili Pepper’s Revolution” and the creation of a “Chili Pepper’s Culture” in China.

In this talk, we will also introduce in detail the various names for Chili peppers and their meanings in Spanish and Portuguese. The etymology of the English name, Chili pepper, will be explained. We would like to highlight once again the great influence that Macao has had on Chinese history and Chinese culture. This influence is reflected in the Chili peppers. More important to the Chinese than the fleeting need for silver, Chili peppers has influenced the taste of Chinese food and become one of the characteristics of Chinese culture, the origins of which can be traced back to the arrival of the Portuguese in the East and their establishment in Macao.

Prof. Jin Guoping is a Visiting Professor of the Institute of Social and Cultural Studies at Macau University of Science and Technology. He is also a Research Fellow at the Center for Macaology at Jinan University.
He graduated from the Spanish Department of Beijing Foreign Studies University, majoring in Spanish and Portuguese. He also holds a higher degree in Portuguese Culture and Language at the Department of Literature, University of Lisbon, Portugal and is an Academician of the Portuguese Academy of History, having received the Order of Infante D. Henrique by the Portuguese Republic.