To promote academic collaboration and exchange between faculty members and students, the Faculty of Arts and Humanities (FAH) of the University of Macau (UM) recently held the first Macao Humanities Roundtable on May 4th, with scholars from various FAH departments presenting their latest research findings in disciplines ranging from literature, history, philosophy, linguistics, translation, to education. The event attracted approximately 200 faculty members and students in attendance.

The roundtable was initiated and organized by FAH Dean Xu Jie and Assistant Dean Joaquim Kuong. In his opening remarks, Prof Xu pointed out that the Macao Humanities Roundtable aimed to provide an equal and multidisciplinary platform for UM members to engage in academic exchange. Given that the roundtable was held on a day marking the 103rd anniversary of the May Fourth Movement, Prof Xu encouraged all faculty members and students to inherit and promote the movement’s spirit and make an impact in their respective fields. In addition, he expressed his gratitude to all students and faculty members for their participation. The event featured 22 presentations grouped into six sessions chaired by Professors Victoria Lei, Zhang Yue, Yang Bin, Zhu Tianshu, Joaquim Kuong, and Cecilia Zhao, respectively.

The presentations covered a wide range of topics with clear and concise content, and highlighted the presenters’ cutting-edge research. At the end of each presentation, the speakers and the audience actively exchanged their views on the presented topics. The participants were able to witness first-hand the rich and outstanding achievements of the FAH researchers and benefited from this experience.

In the History and Language Session, Prof Yang Bin, Head of the Department of History, explained the process of shaping zhang and zhang’s influence on the southern frontier of China, and then used zhang in Yunnan as a case study to explore imperial ruling strategies. Prof Joshua Ehrlich, also of the Department of History, explored how Tipu Sultan legitimized his rule through his library and how libraries can carry complex meanings. He suggested that the fortunes of Tipu Library revealed the enduring symbolic power of plunder. Prof Vincent Wang of the Department of English presented his study on the use of WAR metaphors in the Macau Daily News’ coverage of the COVID-19. Prof Wang Mingyu of the Department of Chinese Language and Literature analysed the modern corpus, examining how “shi” (式) has gradually obtained abstract meaning, and then redefined the “X shi Y” construction in the Chinese language. Prof Chen Zhong of the same Department explored the variable that restricts Chinese predication accommodation, analysing the left-side-relator priority based on the ground-preference, and deepened the understanding of the features of the Chinese language by means of the perspective of multiple variables.

In the Literature and Translation Session, Prof Zhu Shoutong, Head of the Department of Chinese Language and Literature, analysed the cultural use of Chinese characters, errors in cultural understanding and the principles of adaptability in modern life with real-life examples. Prof Tang Chon Chit of the same Department introduced the staging and characteristics of Macao poetry in the Ming and Qing dynasties. He divided the development of Macao poetry in the Ming and Qing dynasties into three stages, combining specific poems with an analysis of the combination of Chinese and Western poetry, the diverse styles, the complex content and a specific “literary landscape”. Prof Yao Jing Ming, Interim Head of the Department of Portuguese, shared with the audience his two books feature the Portuguese translation of the two important Chinese literary works. Then he introduced the current state of translation of Chinese literature in Portuguese-speaking countries, taking Brazil and Portugal as examples. Prof Zhang Yue of the Department of Chinese Language and Literature presented the results of his recent research project. Through a close reading of the text and a comparative analysis of Jiang Yan’s《左記室思詠史》and the《詠史》of Zuo Si, Prof Zhang interpreted Jiang Yan’s comprehension of the spiritual core of Zuo Si’s poems and its significance. Prof You Chengcheng of the Department of English discussed the genre, gender and the eco-translation of Chinese Wild Animals by comparing Shixi Shen’s Jackal and Wolf (2012) and Gerelchimeg Blackcrane’s Black Flame (2013).

In the Linguistics Session, Dean Xu explored the meaning of “Special Language Domain” and its relationship with the principles of Universal Grammar. Prof Ronald Fong of the Department of English discussed the caused-motion constructions in Chinese and English from the perspective of cognitive constructions. Prof Andrew Moody of the same Department explored the occurrence of rhoticity in British pop music by analysing the songs of The Beatles and The Rolling Stones. Mr. Alan Chan of the English Language Centre (ELC) analysed the phenomenon of Cantonese-English code-switching in Macao original Cantonpop songs.

In the Literature and Education Session, Prof Damian Shaw and Prof Matthew Gibson of the Department of English presented a summary and translation from the Latin of an important early medical lecture on vampires by Nils Retzius. They demonstrated how Retzius’s attempt at a comprehensive rational explanation for vampires. Prof Dora Nunes Gago of the Department of Portuguese shared with the audience the representation of migratory journeys and the exilic experience in Portuguese literature, introducing a group of authors who have been ‘forgotten’ by Portuguese literature through Zoom. Prof Jeremy De Chavez of the Department of English argued that reparative approaches, which are attentive to textures, tones, and affective impulses, cultivate attentiveness to the temporal mechanisms of worlding of a literary text.

In the Translation and Linguistics Session, Associate Dean Li Defeng and his team examined the possible advantages in bilinguals by using fMRI technology. Likewise, Prof Victoria Lei (of the Department of English) and her team also used the technology of fMRI to map the interface between language and music in the human brain. On the other hand, Prof Brian Chan of the Department of English analysed the status of single-word English prepositions in Hong Kong Cantonese, providing a new interpretation between the competing concepts of single-word code-switches and lexical borrowing.

In the Philosophy Session, Dr Tam Ka Pok of the Department of Philosophy and Religious Studies shared his viewpoint that Macao has experienced a shift from manifesting cultural self-consciousness in the sea into manifesting cultural self-consciousness in Pearl river waterway in the late 19th century to the early 20th century by employing Hegel’s and Watsuji Tetsuro’s theories. Prof Hans-Georg Moeller of the same Department showed how in contemporary society authenticity is “simulated” in the curation of personal or collective identity in the form of profiles.

With an active exchange of views on the related topics, the roundtable ended with a fruitful communication of academic ideas. 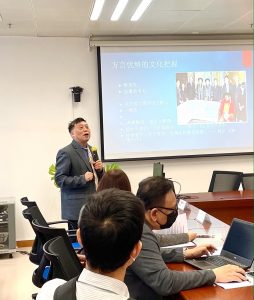 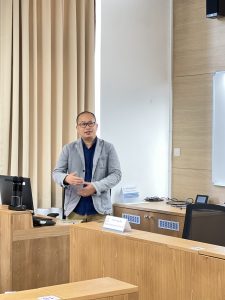 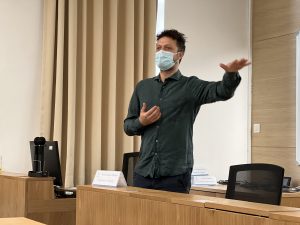 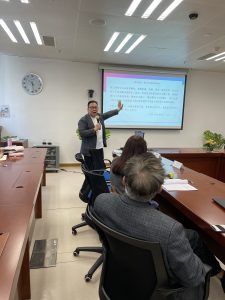 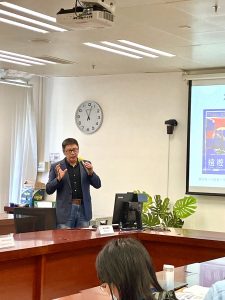 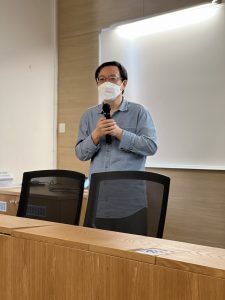 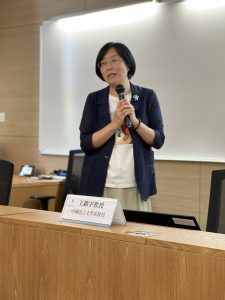 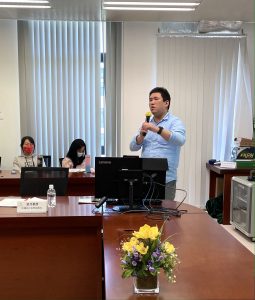 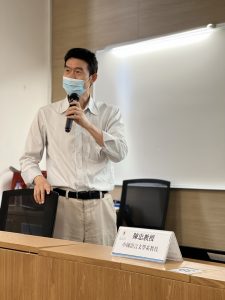 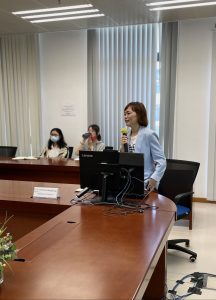 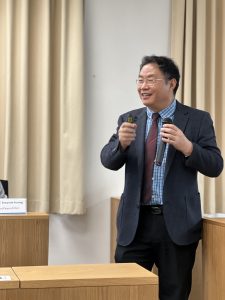 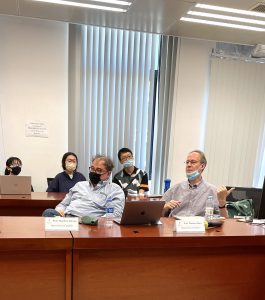 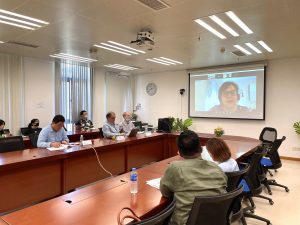 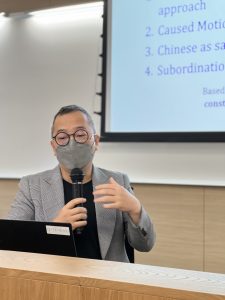 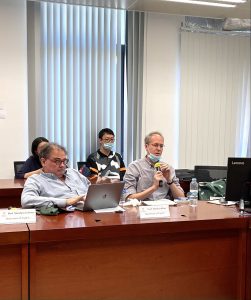 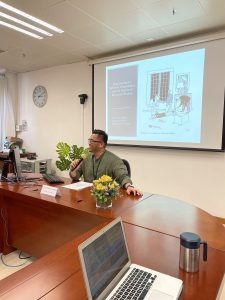 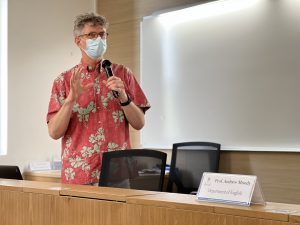 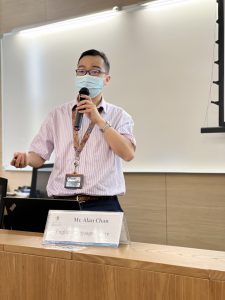 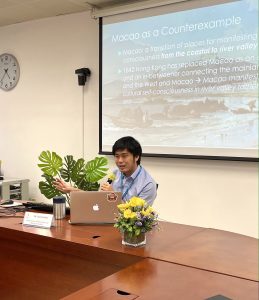 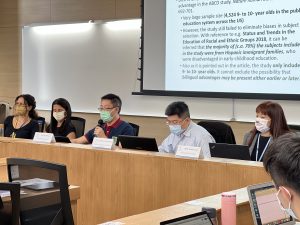 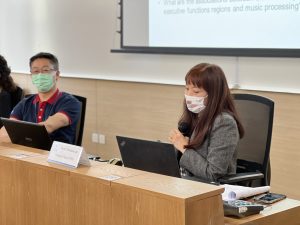 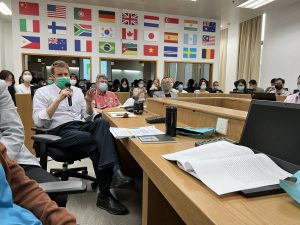 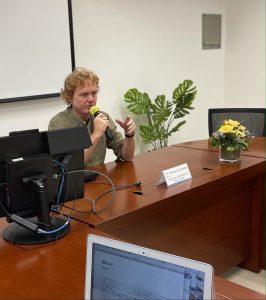 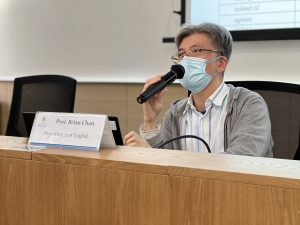 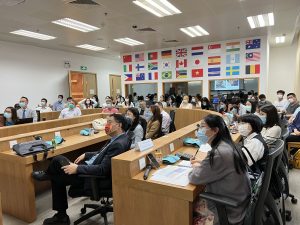 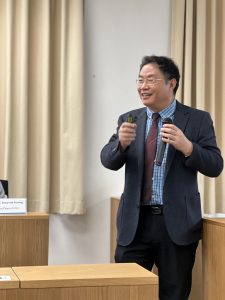 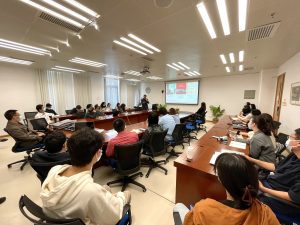