The University of Macau (UM) on 22 March will confer the Doctor of Letters honoris causa degree on Prof Wang Anyi, a renowned Chinese writer, in recognition of her achievements and contributions to Chinese literature. Following the ceremony, Prof Wang will give a lecture titled ‘Chinese-Language Literature in a Global Context’. All are welcome.

Prof Wang’s works have been in the spotlight in the literary arena over the years, winning a slew of awards and honours both at home and abroad, including the Mao Dun Literature Award for Song of Everlasting Sorrow; the National Award for Short Story of 1981 for The Destination; and Writer of the Year 2007 and Xiao Hong Women’s Literature Award of 2011 for Age of Enlightenment. In 2015, she was invited to share her writing experience at the Macao Literary Festival. In the same year, she was appointed a writer in residence in UM’s Cheng Yu Tung College, where she held seminars and writing workshops for students from the college.

Prof Wang has been a prolific writer since she started publishing in 1977. Amounting to some six million words, her works cover a wide range of genres, including novels such as Chang Hen Ge (Song of Everlasting Sorrow), Fu Ping, Huang He Gu Dao Ren (Ancient Man from Yellow River), 69 Jie Chu Zhong Sheng (the 69th Junior High Graduates), and Mi Ni; novellas such as Lapse of Time and Baotown; short stories such as The Destination; prose pieces, which are included in collections such as Du Yu (Speaking to Myself), Nan Ren He Nv Ren, Nv Ren He Cheng Shi (Men and Women, Women and the City), Xun Zhao Shang Hai (In Search of Shanghai), Jian Qiao De Xing Kong (Cambridge’s Starry Sky), and Jin Ye Xing Guang Can Lan (Starry Sky Tonight); and plays such as Jin Suo Ji (The Golden Cangue), and Fa Lang Qing Hua (Love Talk in a Hair Salon). Jin Suo Ji was adapted from a novel written by Eileen Chang. It was staged by Shanghai Dramatic Arts Centre and the Perry Chiu Experimental Theatre in Hong Kong, in 2004 and 2005, respectively. Fa Lang Qing Hua was staged by Shanghai Dramatic Arts Centre in 2008. Some of her works have been translated into English, French, German, Dutch, Russian, Italian, Spanish, Japanese, Hebrew, Korean, Vietnamese, Khmer, and Thai.

The honorary degree conferment ceremony will start at 5:00pm on Friday 22 March in Mr and Mrs Lau Chor Tak Lecture Theatre, Anthony Lau Building (E4-G078), UM. It will be conducted in Mandarin, with simultaneous interpretation into English. Those who are interested should register at https://isw.umac.mo/evm/register/clgc. For enquiries, please call 8822 8400 or email to prs.event@um.edu.mo. 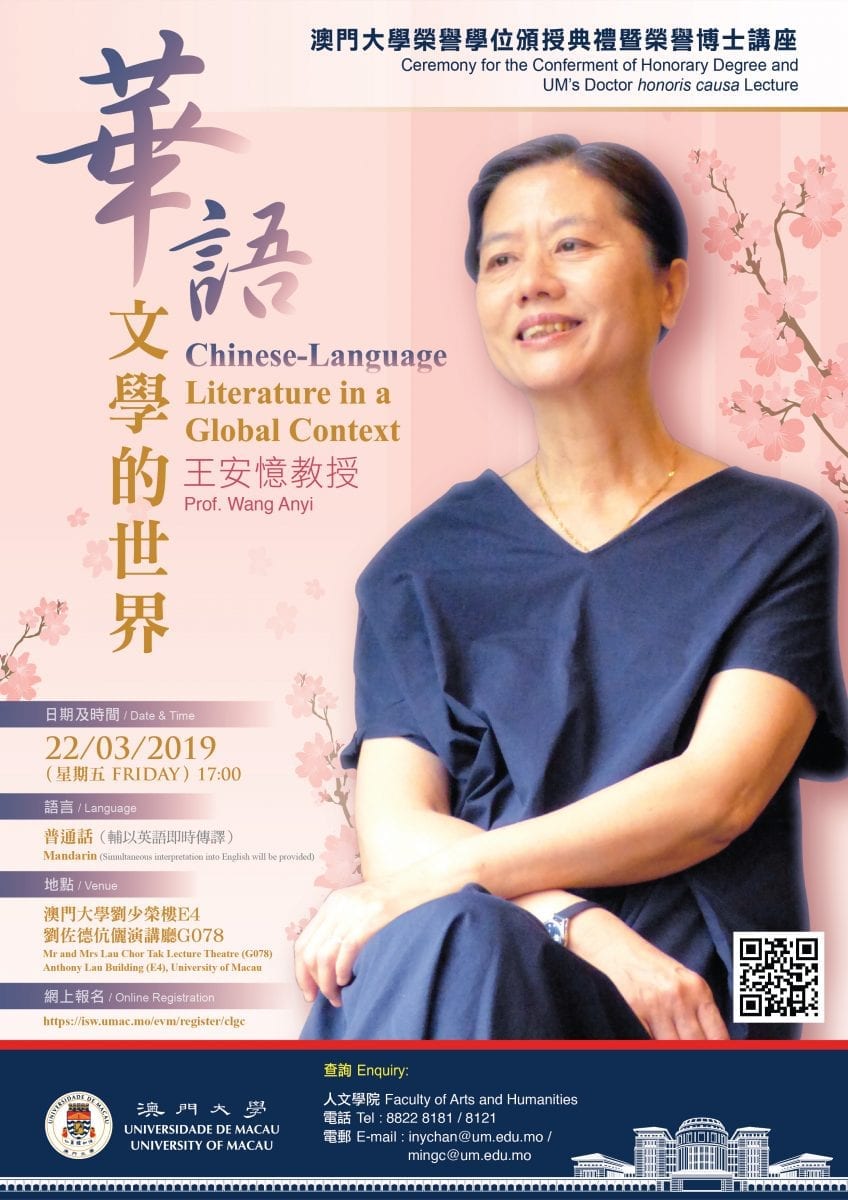 UM will confer an honorary doctorate on Wang Anyi