TRIBUTE TO JOSÉ SARAMAGO ORGANIZED BY CIELA (DEPARTMENT OF PORTUGUESE)

Home/Posts/Department of Portuguese, News/TRIBUTE TO JOSÉ SARAMAGO ORGANIZED BY CIELA (DEPARTMENT OF PORTUGUESE)

José Saramago (1922-2010), Portugal’s Nobel Literature Laureate (1988), is not only a distinguished author within the Portuguese literary sphere, but has long become part of the most significant and read authors who shaped 20th century world literature. This year his centennial birth anniversary is being celebrated worldwide by many academic and non-academic institutions. The Research Centre for Luso-Asian Studies (CIELA), affiliated with the Department of Portuguese, joined these tributes by organizing two online open access events: a postgraduate seminar on one of the pillar works of the author and a webinar with two of the translators of Saramago’s works into Chinese and Japanese. 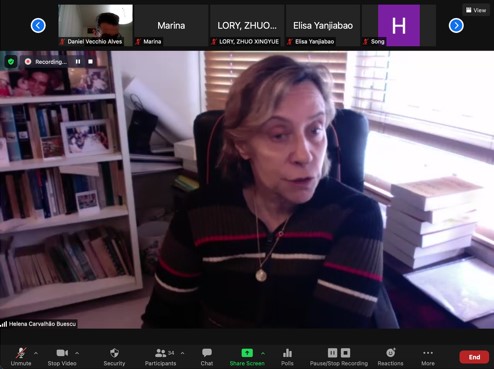 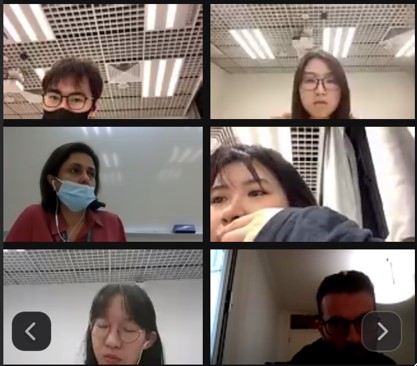 Screenshot of one of the Seminar sessions: Prof. Helena Buescu and a few of the members of the audience, including DPT students.

The seminar, held on 21, 23 & 24 March, was delivered by Professor Helena Buescu, an established researcher in the field of Portuguese and world literature from the University of Lisbon, and attracted 30 members in the audience worldwide. Prof Mário Nunes from the University of Macau introduced Prof. Helena Buescu to the audience and moderated the discussion section. The seminar provided an introduction to Saramago’s main lines of thought and creativity developed throughout his vast literary production, through the presentation, comments and analysis of O Ano da Morte de Ricardo Reis (‘The Year of the Death of Ricardo Reis’).

The webinar on Saramago’s translation into Chinese and Japanese provided a unique opportunity for postgraduate students in Portuguese Literary Studies, and all others interested in the field, to listen to the firsthand accounts of the experiences in translating this author’s works into Chinese and Japanese. Prof. Wang Yuan (of Peking University) translated Saramago’s works into Chinese, whereas Dr. Maho Kinoshita (of the Portuguese Cultural Centre in Tokyo) translated his works into Japanese. The webinar was attended by 44 participants coming from Macau, Mainland China, Japan, Portugal, and Brazil.

CIELA has been the Research Centre affiliated with the Department of Portuguese since the early 1990’s. Besides offering a platform to house and promote research projects carried out by the Department’s academic staff, it has increasingly also provided events that seek to introduce varied topics in Portuguese Studies and related fields in Humanities to the Department’s undergraduate and postgraduate students, as well as to the general public. Since 2020, with the onset of the current pandemic, all sessions have been held as open access online events. The online format has brought much more visibility to the Centre’s activities, and also to the Department of Portuguese of the University of Macau.